About the Lackawanna Heritage Valley

The Lackawanna Heritage Valley National and State Heritage Area (LHV) is located in Northeastern Pennsylvania. Based in Scranton, the heritage area encompasses the watershed of the Lackawanna River in Lackawanna, Susquehanna, Wayne, and Luzerne counties.

The focus of LHV is renewal – renewal of the environment, renewal of a strong and diverse economic base, renewal of pride and a sense of place. The heritage area serves a number of diverse constituencies, including historic and cultural sites, environmental organizations, students, educators, municipal governments, residents, and visitors to the region. Along with its partners, LHV supports and coordinates a diverse array of projects that preserve, promote, interpret, and enhance the historic, cultural, and natural resources of Northeastern Pennsylvania.

The focus of LHV is renewal.

The mission of the Lackawanna Heritage Valley is to facilitate community action in the preservation, promotion and development of the region’s history, cultural heritage, and natural resources.

• Tell the story of the Lackawanna Heritage Valley.

• Preserve and enhance the physical character and economic vitality of the communities in the Lackawanna Valley.

• Reconnect people and communities to the Lackawanna River.

In November 2015, Lackawanna Heritage Valley was awarded the Hometown Star award as part of the Scranton Awards for Growth and Excellence (SAGE) program. This award was in recognition of LHV’s annual Heritage Explorer Bike Tour and Festival and its rich social, historical and charitable contribution to our area.

In November 2010, Greater Scranton Chamber of Commerce and MetroAction awarded the “Pride and Progress” Award for Landscape and Site Design to LHV for the Downtown Scranton Riverwalk as part of the Scranton Awards for Growth and Excellence (SAGE) program. This award recognizes an organization or company in Lackawanna County’s public and private sector for upgrading its establishment, improving the appearance of their neighborhood, and beautifying the region in outdoor landscape and site design.

The Nonprofit Community Assistance Center (NCAC) selected the Summer Heritage Passport Program of LHV to receive its Arts and Culture Award in June 2008. A partnership between LHV and the Lackawanna County Library System (LCLS), the program is designed to familiarize children with their community, their heritage, and their environment. The Summer Heritage Passport Program is free to members of the LCLS, and it is geared for children from preschool through grade six. Each child who enrolls in the Summer Reading Club receives a passport for free admission to seven local cultural and heritage sites. Often, this provides the child’s family with its first opportunity to visit the historic sites that represent and interpret the industrial and cultural heritage of the region.

Natalie Gelb, John W. Cosgrove, and Robert F. Durkin, former executive directors of LHV, were honored jointly by the Lackawanna River Corridor Association in January 2006, with LRCA’s “Lackawanna River Stewardship Award.” The award recognized the leadership of LHVA for the development of the Lackawanna River Heritage Trail and Greenway System, and for the conservation of open space, and natural and cultural resources throughout the Lackawanna Watershed.

In May 2004, President and Mrs. Laura Bush presented the first “Preserve America Presidential Awards” at a White House ceremony. The Lackawanna Heritage Valley Authority was honored for heritage tourism projects that demonstrate commitment to the protection and interpretation of America’s cultural and natural heritage assets. The prestigious “Preserve America” program is a White House initiative in cooperation with the Advisory Council on Historic Preservation; the U.S. Departments of Defense, Interior, Agriculture, Commerce, Housing and Urban Development, Transportation, and Education; the National Endowment for the Humanities; the President’s Committee on the Arts and Humanities; and the President’s Council on Environmental Quality. 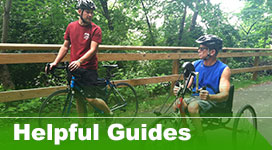